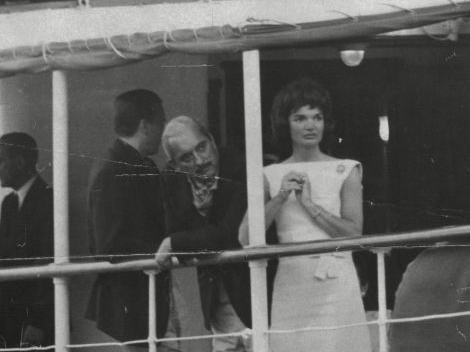 Acronym of the day: BARF (Boats Are Really Fascinating).  Well, lots of them are.  I’m sure there’s some ghost ship full of lost souls doomed to sail the seven seas for eternity with nothing to do and no booze or Netflix, either.  But from the deck of SY Wake this past week, we sighted another vessel anchored alongside us, a particularly striking yacht with a peculiar history:

And, as it turns out, this yacht’s specialness isn’t only in its foxy look, but in its past, too…

So her name is the Christina O.  Now a charter boat (coming in at $520,000 per week, for those of us who take shopping therapy really seriously), the Christina O owes her unique aesthetic to Aristotle Onassis, the Greek shipping tycoon and second husband of the former Jacqueline Kennedy (apparently he first became a young entrepreneur after listening into business calls as a telephone operator in Argentina, which I did not know).  Christina O was named for his daughter (though the O wasn’t added until 1999), and was a maritime palace, ferrying Aristotle and his family between their sundry houses across Europe.

Being the property of a very rich guy, the yacht was a social hotspot for numerous dignitaries and celebrities, including Elizabeth Taylor, Richard Burton, Grace Kelly, Greta Garbo, Frank Sinatra, Maria Callas (‘cause she and Ari were banging for a while there), John Wayne, Winston Churchill, Princess Grace, Marilyn Monroe, and John F. Kennedy (awkward).

But that’s not all!  Onassis actually refurbished Christina O in the years following World War II, purchasing it from the Canadian government in 1947 for $34,000 (almost $390,000 today, or the equivalent of three hundred and ninety thousand bags of M&Ms).  During the War, the boat was actually an anti-submarine frigate, the HCMS Stormond, which served as an escort convoy in the Murmansk supply runs to the USSR, during the Battle of the Atlantic, and she was present at the D-Day Normandy landings.  DUDE.

Everybody hates their old yearbook photos.

You guys, history.  I mean, how extraordinary all are these connections and contradictions and all the past waiting just between the surface of our now?  From torpedoes and blood in the water, laughing starlets and gems…  I love this crap.  Anyways Aristotle gave the Stormond a complete Pimp-My-Ride renovation.  He commissioned eighteen staterooms, a spiral staircase, a beauty salon and massage parlor, a sports room, a library, a helicopter pad, marble bathrooms, a lapis lazuli fireplace, its own seaplane, a children’s playroom, on- and below-deck bars, and a controlled-temperature swimming pool holding a mosaic featuring the infamous Minotaur, which at the press of a button could be lifted to become a dance floor.  The whole refit cost four million dollars, but hell, this is how you live like a baller.

So I managed to rustle up some historical and modern photos of Christina O, which are pretty dope:

And, because BARF, the barstools are made from the foreskins of whales.