Holla!  Kitty here, and it’s been a long time since I’ve put up a blog post, due to a mixture of sloth, a visit from our tremendously awesome friends, and a number of concerts (Davi touched Lenny Kravitz! and his security guard punched me in the throat)—basically, lots of Shore Leave.  But we’re back, with further videos and pics to come, and the dark, dark tale of a rather embarrassing episode in the life of SY Wake.

See, it’s been *counting on fingers* six months since we met the boat and brought her back here to La Spezia, and since then our “work” has consisted largely of on-and-below-deck improvements, lounging, and figuring out how to build a floating bar on the paddleboard (totally achievable). 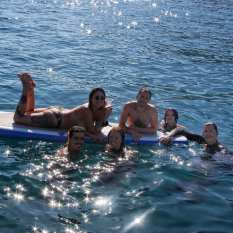 Of all the gin joints in all the world….

BUT apparently you are supposed to scrub and scrape the underside of a boat on a regular basis, lest it become rife with maritime pests, such as barnacles.

Let’s talk about barnacles!  They’re part of the subphylum Crustacea, which means they’re rather unexpected relations of crabs and lobsters (like how aforementioned Lenny Kravitz and Al Roker are distant cousins, look it up).  A newly hatched barnacle is called a nauplius, and consists of basically a head with a tail; in the larval stage the head starts secreting a gooey adhesive substance which is kind of gross, and attaches itself to a suitable substrate (such as rocks or our own damn boat).  Barnacles then develop an exoskeleton of hard plates, begin using teeny legs to eat plankton, and become the acne of pirate ships which we all know and love.

Also, in Olden Days, certain barnacles were thought to hatch into the goose species Branta leucopsis (unsurprisingly named the Barnacle Goose), because people can be dumb as hell sometimes.

Sooooo when Wake began to cruise at a slower and slower pace, we figured there were probably a few barnacles clinging to the hull, thus hindering the boat’s streamlined progress.  No prob, we thought, just gotta take her out of the water on the haul and get her cleaned.  Just a couple o’ barnacles.  Well, as I said, people can be dumb as hell sometimes.

There exist moments in life in which few words can express the true nature of a sight, and in the case of Wake being lifted from the marina, the sole turn of phrase which came to mind was “holy shit”.  See:

Yep.  It turns out that barnacles grow freaking fast, and that spooky weeds can sprout around them, too.  Fortunately, the good stevedores (can I call them stevedores? that’s a word we don’t use enough) of Porto Mirabello knew just how to power-hose the little bastards off the hull, which kind of reminded me of the guns they use in Ghostbusters.

Meanwhile, each and every worker took the time to ramble over and admire the cats, who waited in their carriers pretending to be wholesome while big burly Italian dudes cooed at them.

At last, Wake was clean, returned to full function and ready to return to the waves, and we learnt a valuable lesson in why you need to scrub the hull frequently.  Away we sailed, the wind whispering redemption around us, when at once we heard a mournful cry…

And then the boat gave birth to a beautiful new goose!